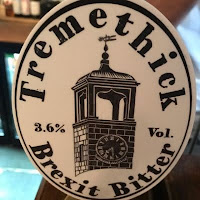 Well, at last we’ve got there. Forty-three months after the referendum, and ten months after it was supposed to happen, today we are finally leaving the European Union. So I think I can be forgiven for indulging in a celebratory libation of English ale.

The day after the referendum, I made the point that the smoking ban, and other instances of the political class treating ordinary people with patronising contempt, was a small contributory factor towards the result. And subsequent events have only served to reinforce that message.

Message to @UKLabour - treat the working class with contempt, take their pubs away, and they will come back and bite you on the bum
— Pub Curmudgeon 🍻 (@oldmudgie) June 24, 2016

A reminder that the comment facility is not provided as a platform for Brexit bitterness.