Do it the French way 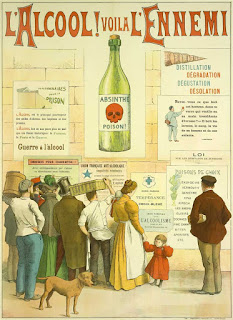 Last week, I made the point that the lack of legislative action on the anti-drink agenda during the 2010s shouldn’t give any grounds for complacency during the coming decade. And, as sure as night follows day, it didn’t take long for the first salvo to be fired by the neo-Prohibitionists in the New Year.

Writing in Saturday’s Daily Mail, our old friend Professor David Nutt described alcohol as a national epidemic and urged concerted action across a number of fronts to address this menace. Not surprisingly, the article was full of exaggerations, misleading statements and downright lies. It was comprehensively filleted by Christopher Snowdon with his usual aplomb, saying that Nutt was “wrong in every possible way”. Please read it – there’s really very little I can add.

It is interesting that Nutt singles out France as an example for us to follow, although I’m not sure it’s really such a good role model as he seems to think. It is certainly true that France has halved its per capita alcohol consumption from a very high figure in the early 1960s, but according to various international comparisons it’s still at a similar level to the UK. And how much of that is due to general social trends as opposed to specific government policies?

He praises France’s severe restrictions on alcohol advertising, but it’s generally recognised that advertising primarily serves to influence brand choice rather than the level of consumption as such. The main impact of advertising curbs is to make it more difficult to launch new products. He also says that the government encouraged wine producers to make higher quality wines rather than vin ordinaire, but isn’t that in line with the general trend across the developed world to drink “less but better”? And you certainly can get drunk on Chateau Latour if you can afford it.

He highlights France’s decision to cut its drink-driving limit, but by doing so he effectively identifies this as primarily an anti-alcohol measure, which of course it is. Despite this, France still has a level of road fatalities, in terms of both population and vehicle mileage, about 70% higher than the UK. He conveniently ignores the fact that the limit was reduced in Scotland five years ago, and so far has failed to produce any noticeable reduction in accidents either in absolute terms or relative to England and Wales.

He also urges the other parts of the UK to follow Scotland’s example and introduce minimum unit pricing. But there is no minimum pricing in France, and you will still make big savings across the range of alcoholic drinks in the Calais hypermarket, although maybe not as much as you once could, due to the relative weakness of the pound in recent years.

Of course alcohol does cause problems for some who misuse it, but most people manage to handle it in a responsible manner and it brings pleasure to millions. Any attempt to deal with alcohol-related issues should surely adopt a targeted approach rather than being a form of indiscriminate collective punishment.

It may be easy to dismiss this as typical hyberbolic Daily Mail scaremongering. However, it should not be forgotten that the Mail was one of the main cheerleaders for the current government, and is often thought to represent the voice of “middle England”. They are far more likely to listen to the Mail than the Guardian. So nobody should delude themselves that the election of a new government that claims to listen to ordinary people means that the Nanny State agenda is now off the menu.