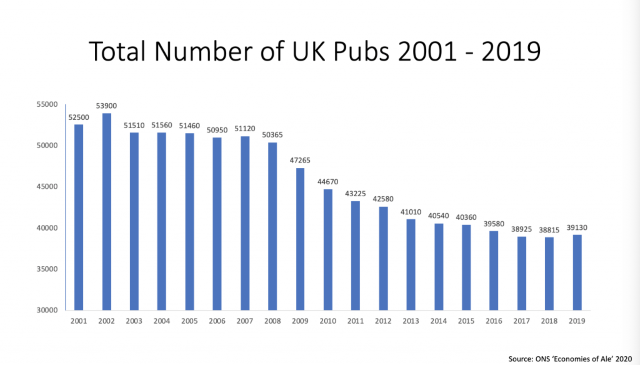 Regular readers of this blog will be well aware that I’ve not always seen eye-to-eye with beer writer Pete Brown. However, when he puts the agitprop politics to one side and takes a detailed look at the beer and pub industry he can come up with some well-researched and interesting material. He has recently been investigating the truth behind the recent news that there had been an increase in pub numbers in the past year, and has produced a couple of blogposts on the subject, both of which are well worth reading in detail.

Is The Moon Under Water Finally Getting its Head Above the Surface?

Economies of Ale Part Two: How the Pub is Evolving

It’s interesting that he acknowledges the impact of the smoking ban on the decline of pubs, something that for long was taboo amongst most of the beer commentariat.


That massive, horrible drop between 2007 and 2013 was the result of a clusterf*ck of negative factors: the smoking ban started in 2007, the global financial crash happened in 2008, and in response the then government thought it would be a good idea to punish an already reeling industry with the beer duty escalator, which helped the total tax burden payable on beer rise by 40% in four years.

He’s also pretty scathing about the anti-pubco conspiracy theorists. As I’ve often said on here before, while some of the business practices of the pubcos leave much to be desired, their role in the decline of the pub trade has been trivial. It is essentially a problem of demand, not supply. And, if there was a huge untapped demand, then surely independently-run pubs would be booming, whereas in reality they’re doing no better than ones owned by pubcos.


Last year the Office of National Statistics (ONS) launched their ‘Economies of Ale’ report into the changing numbers of British pubs. It painted a gloomy picture that we were used to, but I spotted an interesting quirk in the data. It showed that small, independently owned pubs were closing faster than larger pubs owned by the big pub companies. So I wrote a column pointing out that, if this was the case, the big pubco tie can’t be the main reason for pub closures – not if pubs that have nothing to do with the pubcos are closing faster than pubco-owned pubs. That’s simple logic. It’s not to say the pubco tie isn’t a factor in closures, but it can’t possibly be the main factor.

Not for the first time, the piece was given a misleading headline by the sub-editors, which didn’t accurately reflect the tone of the piece. And as few people these days bother to read beyond the headline, if you follow the debate around pub closures at all, you can guess what happened next.

According to my social media feeds, my story was proof that the ONS, the whole British Guild of Beer Writers, the entire UK national media and most of all, me personally, were involved in a vast conspiracy and were being paid off by the likes of Ei Group (formerly Enterprise Inns) and Punch Taverns. I had been paid thousands of pounds by the pubcos to write this piece. I was apparently performing sexual favours on the chief executives of these companies, and I was actively supporting their actions in the pub market because I hated pub tenants and lessees and the businesses they ran. I absolutely loved big corporate CEOs because, in ways that were never made quite clear, their actions benefited me professionally.

The people who wrote these comments remain hurt and bewildered that most beer writers refuse to engage with them.

A few years ago, Pete wrote an angry blogpost in which he called racism over the suggestion that had made that, in some areas, the increasing Muslim population had been a major factor in the decline in pub numbers. However, it was pointed out in the comments that this wasn’t racism, but a simple question of fact. If the proportion of people in the population who don’t drink alcohol, especially in public, increases, then inevitably the demand for pubgoing will decline. He later deleted the post, and now accepts the point in his article.


The worst-hit boroughs are an absolute bloodbath:

Why? Well, one thing all these areas have in common is that they have a high proportion of ethnic communities who for religious and cultural reasons don’t drink alcohol. Over the course of the 21st century, while the ethnic population as a whole may or may not have increased all that much, the children of people who moved there earlier have grown up and replaced a cohort of young people who used to spend a lot of time in pubs with a cohort of young people who don’t.

In contrast, some areas, especially those with a strong tourist appeal, have seen an absolute increase in the number of pubs, although I have suggested that this is likely to be not so much from the opening of new bars as from the reclassification of existing restaurants and hotels, and new restaurant-type establishments obtaining full on-licences. However, he rather gets his statistics in a twist:


West Somerset has seen a 25% increase in the number of pubs – the most of any region in the UK. Numbers have also grown in the Scottish Highlands and stayed stable in the Western Isles, confirming that tourism plays a key part in keeping pubs alive. This gets even more apparent when you split the data by number of pubs per capita. West Somerset, the Cotswolds, South Lakeland, the Derbyshire Dales, North Devon, West Dorset and Stratford-upon-Avon all have more than one pub for each person who actually lives there, and have only seen a fractional fall – or an actual increase – in the total number of pubs.

More pubs than there are residents – I don’t think so. That would suggest 35,000 pubs in West Somerset, which seems a little unlikely. At a guess, the figure is more likely to be no more than one pub per hundred population, if that.
Posted by Curmudgeon on January 28, 2020