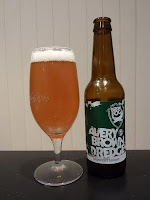 There’s been plenty of talk in the beer blogosphere about Avery Brown Dredge, the special “Imperial Pilsner” brewed by BrewDog with the involvement of the three named beer bloggers.

I’d never come across it before, but last night in the Magnet in Stockport I spotted it in the fridge, so I ended up having a couple of bottles. £3 for a 330ml bottle of 7.5% beer isn’t cheap, but on the other hand you often pay that (although not in the Magnet) for a pint of 4% bitter, which contains less alcohol.

I thought it was an excellent beer – obviously very hoppy, but with the characteristic Pilsner grassiness rather than the full-on Panzer assault of Hardcore IPA, fairly light in body, and with an underlying maltiness. In a word, it had balance. Obviously, as I have said on here before, I enjoy a well-made lager.

Certainly a beer I’d buy more of if I found it in the off-trade, although £1.99 would be a more reasonable price.
Posted by Curmudgeon on July 15, 2011