Thwaites on the move? 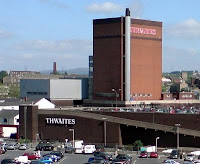 Blackburn family brewer Thwaites have announced that they are going to sell off the site of their current brewery in the town centre to Sainsbury’s, and relocate to a new site elsewhere in the area.

Now, I have no concrete reason to believe that they are anything but entirely sincere in saying this is what they plan to do. But I can’t help feeling a slight twinge of doubt that the new brewery will ever materialise. I remember Young’s saying back in the early 2000s that they were planning to build a new brewery at another location in Wandsworth, but they ended up entering into a joint venture with Charles Wells.

At a time when there is still substantial overcapacity in British brewing, does building a brand new large scale brewery really make sense? I’m sure InBev could spare some capacity just down the road at Samlesbury, and Robinson’s in Stockport are currently building a new brewhouse on their existing site, and have a large and underutilised packaging centre at Bredbury.

And, given that the current brewery was only built in 1966, it’s a bit rich for Thwaites to say “It does not provide the flexibility or efficiency for the demands of today’s market and requires significant modernisation”, when the four Greater Manchester family brewers are all operating out of premises that are at best pre-war.