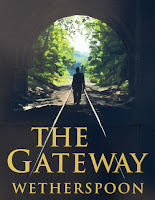 Last year I reported how Hydes had put the Gateway pub in East Didsbury up for sale, and discussed how social changes had impacted on the fortunes of this and many other 1930s “roadhouse” pubs. It was subsequently sold to Wetherspoons and has now reopened this week.

The interior has not been dramatically changed, although the toilets have been relocated and some of the remaining bench seating has, in typical Wetherspoon fashion, been stripped out. Dark wood predominates and it’s all very tasteful and even up-market looking, with an interesting series of spaces rambling around the central bar. There were eight cask beers available, all of which apart from Ruddles Best were bucking the trend of the times by coming in at over 4.5% ABV. The standard price for guest beers seemed to be £2.45 a pint, which is cheaper than central Didsbury, but no longer a stunning bargain.

The pub is next to a bus interchange and across the road from the Star City leisure complex, so there is some ready-made footfall, but it remains to be seen how well Spoons will do in this kind of location which is not on a drinking circuit, and where many customers have to make a specific effort to get there. There is – unusually for Spoons – a small car park with about 20 spaces (full when I visited), added to which there is plenty of parking at Star City. If Spoons can make it work, it will open up a whole new vein of expansion for them, as across the country there are plenty of other big suburban pubs that are currently struggling.
Posted by Curmudgeon on July 15, 2011