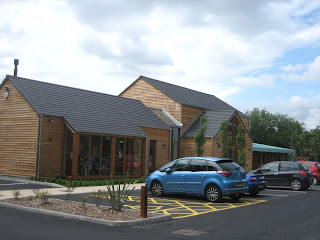 The Stockport area now has a new gastro-pub in the shape of the Pointing Dog in Cheadle Hulme, which opened last week. This has been developed by the Felicini Group from the former Smithy pub. As you can see, it’s a strikingly modernistic wood-clad building that doesn’t look remotely like a pub. The Smithy had for years pursued a youth-oriented policy and had became very run-down, so few tears will be shed for it.

The Pointing Dog is very much a “restaurant with bar” rather than any kind of pub, but there is an area set aside for drinkers at the front on the right. It even had beermats and a few bench seats! The dining area had a sign saying “Please wait here to be seated” and there were no informal bar snacks. There’s a very large part-covered outdoor seating area at the rear.

There were four cask beers – Theakstons Best Bitter, Deuchars IPA, Dunham Massey Big Tree and Castle Rock Harvest Pale – and the lager choice included Sagres, Amstel and the Derbyshire-brewed Moravka rather than the usual suspects, so they are making an effort on the beer front. However, I was charged £3.60 for a pint of the 3.8% ABV Harvest Pale, which is by some way the most I’ve ever paid for a “regular” cask beer. At least it was a decent pint. The beer was served in a heavy, straight-sided handle glass. I would expect the lagers to be over £4. 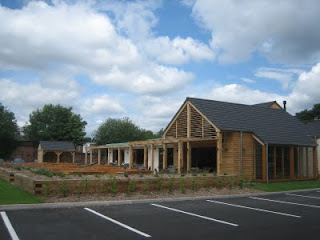 Needless to say, it’s unlikely to become a regular haunt of mine, although I wouldn’t condemn it out of hand, just say it’s not my sort of place. You could actually just go there for a couple of drinks without made to feel unwelcome, which isn’t the case with many gastro-pubs.

I couldn’t see any sign of a price list – maybe they thought it might be a heart attack-inducing health hazard, but even so Trading Standards might not be too happy. I couldn’t see a menu either, so can’t comment on the food prices, but I’m assured they’re at least double Wetherspoons’.
Posted by Curmudgeon on July 22, 2011