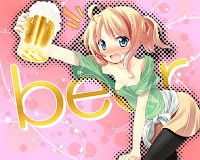 Brewer Molson Coors have just launched a new beer called Animée which is specifically targeted at female drinkers. This has been widely criticised as patronising and sexist, and unlikely to succeed, and those critics are probably right. But, on the other hand, it can’t be denied that beer as a category has a serious image problem amongst women and, as the article says, only 17% of beer in Britain is consumed by women. It’s not enough just to respond by complacently saying “if you can actually get them to try Old Volestrangler they really like it.”

Beer is widely perceived as gassy and bloating, and also as something that will make you fat. Neither of these objections are really valid – the first one is easily answered by choosing cask ale, and the second isn’t really true. Strength for strength, beer has no more calories than other forms of alcoholic drinks. But they are still widely believed.

Beer in general still has a laddish, pint-swilling, footy-chanting image which continues to be pandered to in many marketing campaigns. Many cask beers adopt a kind of rustic, bare-boards, back-to-nature imagery which may appeal to fans of The Good Life, but doesn’t exactly come across as well, very sophisticated. Plenty of women do drink beer, but in many cases they do it for precisely the reasons that deter others – because it comes across as a touch rebellious and not in the least “girly”.

What is needed, surely, is not dedicated “beers for women”, but a marketing strategy which avoids any hints of machoness but instead portrays beer as a modern, authentic, high-quality product that can be enjoyed by both sexes in a social context. You may not think much of the beer, but the recent Kronenbourg “slow the pace” campaign was a good start.

And its presentation needs to be looked at. If it is to seem smart and contemporary, utility Noniks need to be ditched in favour of stylish branded glassware, and those glasses should ideally be oversize so you don’t run the risk of spilling beer all over your clothes.

Perhaps even the much-loved handpump, powerful symbol of cask beer though it is, needs to be called into question. After all, you wouldn’t do your washing with a mangle or specify a car with running boards, so why in the 21st century should you be dispensing beer using a manually-operated device dating back to the Regency period?
Posted by Curmudgeon on July 30, 2011