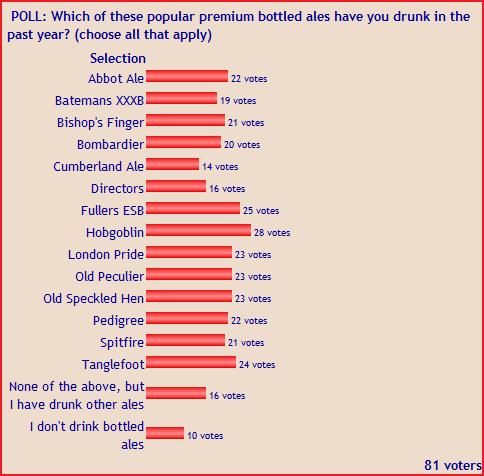 The recent discussion about the growing divergence in strength between cask ales in the pub, and premium bottled ales in the supermarket, prompted me to run a poll on the popularity of the best-known PBAs. This was purely an exercise in curiosity and I didn’t have any particular axe to grind. The beers listed were my subjective assessment of the most widely available beers in the category. It is notable that none are produced by the international brewers, who seem to have pretty much entirely withdrawn from that market segment.

There were 81 responses. 10 didn’t drink bottled ales at all, and 16 said they had drunk other bottled ales, but not the ones listed. So 55 people had drunk at least one. Hobgoblin was the most popular, with 28 votes; Cumberland Ale the least popular with 14.

There were inevitably one or two comments along the lines of these being “boring brown beers”, but, as I replied, Tesco are only going to stock what they can sell. Even if you brew the most wonderful beer in the world, you still have to persuade drinkers to buy it and retailers to stock it. It would be interesting to try to construct an alternative list of “higher quality” bottled beers that do have some profile in the off-trade. For starters I might suggest Hop Back Summer Lightning, Butcombe Bitter, Thwaites Indus IPA and Samuel Smiths Old Brewery Pale Ale.

In my view all of those listed are actually quite decent beers, although I don’t personally care for Bombardier, Hobgoblin and Spitfire, and can never really get to grips with Fullers’ distinctive rather “biscuity” house character. On the other hand, I think the much-maligned Abbot Ale is actually a very good beer. Unless you have access to a specialist off-licence, these beers are about as good as you’re going to get for drinking at home.

As I said in the comments on an earlier post, I have more than once heard people referring to PBAs as “real ales” which, of course, strictly speaking, they aren’t.

The poll results and associated comments can be seen here.
Posted by Curmudgeon on July 09, 2011