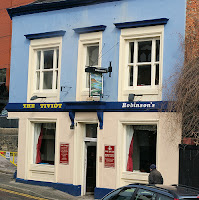 Sad news that the Tiviot pub in Stockport town centre is to be demolished in eight weeks’ time. Apparently the building has been condemned as unsafe by the council, but it would not have been allowed to get into such a state if it had been seen as having more of a future.

Yes, it was tatty in places, but going through the door was like entering a timewarp back into the 1950s. It even still had wrought iron bar fittings – you don’t seen many of those around nowadays. Until fairly recently, it was one of the last Robinson’s pubs in Stockport to serve Mild and Best Bitter into oversize glasses using electric metered pumps. Licensee Dave Walker was one of the longest-serving in the Robinson’s estate, and had taken over the tenancy from his father.

Not surprisingly, the clientele tended towards the more mature end of the spectrum. It could be busy at lunchtimes, but was often quiet in the evenings. It was the epitome of what Cooking Lager would dismiss as “dumpy old men’s pubs”, and all the better for it.

We will not see its like again.
Posted by Curmudgeon on August 25, 2011