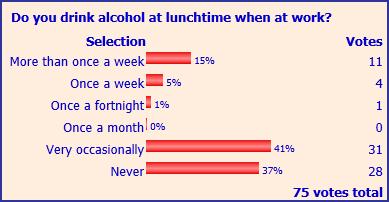 Well, it would seem that blog readers are not very keen about lunchtime drinking when at work. Out of 75 responses, 79% said it was something they would do either very occasionally or never.

This is a major change in pubgoing habits that has occurred over the past twenty or thirty years. When I started work in the early 80s, it was usual to go to the pub at lunchtime – and drink a couple of pints – at least one day a week, often more.

But now, partly due to changing attitudes towards alcohol, partly due to more restrictive policies from employers, for most workers the lunchtime pint is rare or non-existent. I have a facsimile of a guide to central Manchester pubs produced in 1975, which comments how many of the pubs were busy at lunchtimes, but much quieter in the evenings. Nowadays, assuming the pubs are still there, it’s usually the other way round. Even if people do go to the pub for a leaving do or suchlike, most will stick to soft drinks.

Obviously it can be argued that this is a good thing in an age where idleness and low productivity at work are much less acceptable. Many will say that they like to keep themselves fully on the ball while at work, but can still go out and have a few pints in the evening.

But the point is that the number of occasions during the week when going to the pub is something that people will consider doing has been reduced, to the inevitable detriment of the pub trade. For many, lunchtimes while at work were the main occasion when they had an opportunity to visit a pub, as opposed to making a specific journey for that purpose. Pubgoing becomes a specific interest rather than something woven into the fabric of everyday life.

And that is the process of “denormalisation” in a nutshell – a steady curtailment of what is considered “normal” behaviour, which creeps up on people so stealthily that they don’t notice it happening.