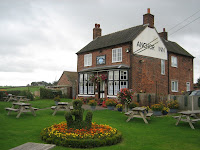 In the September issue of the CAMRA newsletter What’s Brewing there’s a letter from Frank Mitchell of Claverdon which includes the following comments:


In my part of Warwickshire there are so few decent drinking pubs remaining compared to just a few years ago. Many of them have been taken over by people masquerading as chefs and attempting to become the latest gastro-venue and have discouraged drinkers from going there just for a drink.

In others the beer quality and service is so poor or the prices so unreasonable that customers have almost abandoned them altogether.

There is hardly a decent pub where you can meet friends just for a drink and a chat together without having a menu thrust at you or being made to feel guilty for occupying a table that food can be served on.

It has to be said that this reflects what I’ve been saying on here for the past four years. The same is a major problem in Cheshire. Of course food has its place in pubs (as Mr Mitchell later acknowledges), but there comes a point where it dominates to the exclusion of all else. The core purpose of a pub is as a social meeting place where people will gather over a few drinks, yet nowadays you see so many press articles that assume that the menu is the main attraction. I’d say, once more than four-fifths of customers are there just to eat, you’ve lost it. But even a sprinkling of social drinkers can keep your pub authentic.

So, maybe as CAMRA has saved real ale, we need a Campaign for Real Pubs to save pubs. Pubs that work as pubs should, that don’t make casual customers feel unwelcome, that cultivate sociability, and that don’t make food the centre of their offer. This applies especially outside major urban centres, but within them too. Obviously the smoking ban, beer duty hikes, the demonisation of “one-drink driving” and the general anti-alcohol climate have all had their effect, but such pubs do still survive and deserve to be celebrated.

CAMRA’s National Inventory and the additional regional lists would be a good starting point. A few of the pubs on there won’t qualify, but the vast majority will. I’d doubt whether any Wetherspoons would be included, or any chain dining pubs, and many of the specialist beer pubs concentrate on that aspect of the business so much that they fail in the basic social function. On the other hand, if they attract a good number of customers who aren’t just there for the beer, as with the Barrels in Hereford, they might qualify.

Maybe I should start a blog of Real Pubs as a counterpoint to Closed Pubs, so people couldn’t accuse me of being unrelentingly negative...
Posted by Curmudgeon on August 31, 2011