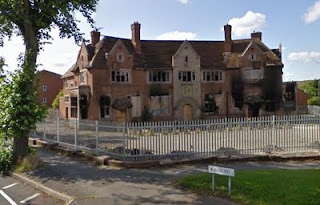 A year ago today, I started a blog entitled Closed Pubs. This was originally prompted by a non-beer-related forum, where people were invited to put forward some interesting sights in the then new Google StreetView. I posted a couple of views of boarded-up pubs near to me, and then thought that, since there were so many closed pubs around the country, I could turn it into a blog. So I did.

So far I have featured 207 pubs. Some are ones known to me, some suggested by correspondents, some I have spotted on Internet searches. It has featured town-centre pubs, inner-city pubs, suburban pubs, estate pubs, classic roadhouses, village pubs, isolated country pubs, indeed pretty much every kind of pub known to man. I’d like to record my thanks to those who have e-mailed me with suggestions for the blog.

There can be no doubt that over the past few years the British pub has experienced an unprecedented holocaust. Before then, unless it was due to population decline in the locality or redevelopment, pubs scarcely ever closed. But now, it seems that pretty much everywhere you go you are confronted with the depressing sight of a closed and boarded pub.

I don’t for a minute claim that all of it is due to the smoking ban – indeed some of the closed pubs pictured predate the smoking ban by many years. But only the most self-deluding antismoker would claim that the smoking ban has not played a significant part in pub closures over the past four years. For a lot of pubs it seems to have been the straw that broke the camel’s back.

And the question has to be asked whether this is an “adjustment” which will lead to the pub trade stabilising at a lower level, or whether it is the sign of an inexorable long-term decline that in a generation will reduce pubs to a tiny, irrelevant rump. Yes, some pubs are still thriving, but many of those that are still open are noticeably much less busy than they once were.

The pub illustrated, The Beeches in Northfield, Birmingham, is maybe the saddest of the lot, its mock-Jacobean magnificence, almost like a licensed stately home, contrasting poignantly with its current burnt-out dereliction. It wouldn’t surprise me if it had now been demolished.
Posted by Curmudgeon on August 21, 2011