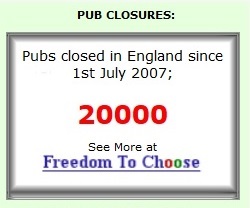 Over the past few days, the pub closures ticker in the sidebar has passed the 20,000 mark. Now, I’m well aware of the limitations of this data, that it’s simply based on statements of weekly or monthly pub closures issued by the likes of the BBPA and CAMRA, and that it’s essentially a gross figure that does not take account of new bar openings. But it certainly conveys a fundamental truth, that the pub trade overall has seen a dramatic decline over that period. According to the most recent figures produced by the BBPA, beer sales in pubs have declined by 35% since 2007, so it’s not exactly surprising that so many have closed.

I would never claim that the smoking ban has been a monocausal factor in pub decline over that period, but it has certainly been a significant one, especially amongst the more down-to-earth, wet-led pubs. It’s undoubtedly true that a huge number of much-loved pubs have been lost, such as, in Stockport alone, the Tiviot, Waterloo and Grapes. And, if you’ve lost the only pub in the area where you live, it’s scant consolation that a new craft bar has opened up three miles away in the town centre charging four quid a pint. It is nothing remotely resembling a like-for-like replacement.

Edit: At present the counter appears to be advancing by three per day.