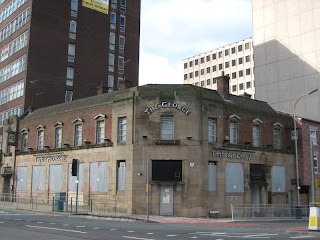 Shown here is a photo of the George in Stockport at the busy junction of the A6 and Heaton Lane opposite Debenhams. It has been in a closed and boarded state for around six months now, and represents a real eyesore right at the centre of the town. Many years ago it was one of the scattering of pubs in east Cheshire and Staffordshire tied to Liverpool brewery Higsons – another was the Fool’s Nook on the A523 south of Macclesfield.

From when I first remember it in the mid-80s part of it had been turned into a would-be “trendy wine bar”, but the other half retained its lavish 1930s fittings with extensive wood panelling. It also served Draught Bass as well as Higsons. Apparently in its original form the small corner door gave access to a tiny separate vault.

It was later thoroughly knocked through and given a more generally modern makeover, but never really seemed to find its feet, so in the current climate its ultimate closure came as no real surprise. Many of these pub company outlets in town centres seem to have struggled as they have been neither fish nor fowl, not modern enough to appeal to the youth market, traditional enough to appeal to the older drinker, or with enough emphasis on beer to attract the enthusiast, and not really doing anything as well as Wetherspoons.
Posted by Curmudgeon on July 24, 2011