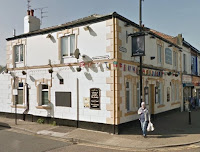 I recently received en e-mail from Punch Taverns inviting me to try a free pint of Carling or Stella in one of their pubs. Some might have turned their noses up at this, but, as you all know, I will drink owt never look a gift horse in the mouth. The selection of local Punch pubs on their website was very much a list of those I tend to avoid, but eventually I plumped for the Sir Robert Peel on Castle Street, Edgeley.

Originally a Greenalls house, the “Bobby Peel” is outwardly the most attractive of the five remaining on the street. The photo at the right is pre-refurb. It has flirted with real ale in the past, but on a Stagger a few years ago we ended up being refunded for undrinkable beer which they were in no position to change, and on the next one it had reverted to keg. It has recently been given a major refurbishment by Punch, and so I thought it would worth be popping in to check it out.

Previously a two-roomer, it has basically been converted to a single bar layout, although the old vault side, containing the pool table, is still fairly distinct. The general style of decor is very much “Amber Taverns” contemporary wet-led boozer, with bare boards, plenty of posing tables, little fixed seating, a multiplicity of TV screens and loud(ish) music, on this occasion Oasis. Even on a Wednesday lunchtime it was fairly busy, the all-day offer of Fosters and John Smith’s for £2 a pint possibly helping.

Although the promotion had been running since Monday, this was the first voucher the barmaid had encountered, but she rapidly dug out the relevant documentation. It’s a smartphone voucher, not a paper one. Several other customers were asking how they could get hold of one themselves. Stella obviously isn’t the world’s greatest lager, but it’s drinkable enough, especially when free. I was pleased to get a branded chalice without a gold rim, which is something I find oddly offputting on a beer glass. There’s now one cask beer in the form of Doom Bar, but I didn’t see anyone drinking it.

Punch have also installed this smoking shelter in the beer garden, which strictly conforms to the regulations, but at least shows they’re making an effort, with heaters, lighting, seats and bins provided. Many pubs do a lot worse. The beer garden also features a nice green expanse of Astroturf. 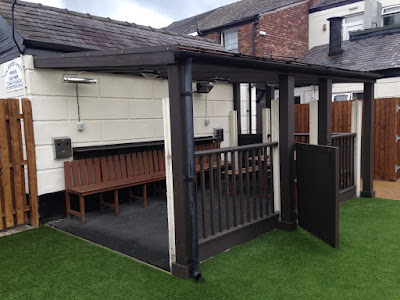 So an interesting bit of pub exploration but, except for the free pint, in pretty much every other respect I was happy to adjourn to the nearby Armoury. Carpet, beermats, cloth-covered bench seating, frosted windows and a brass fireplace topped with a Pub of the Year runner-up certificate and a Cheshire Regiment poster. What more could you ask for? It also has a more commodious smoking shelter. All that’s missing is a pub cat. 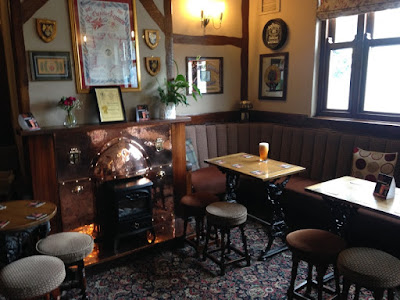 You might be able to get yourself a free pint by following the link in this tweet:

I've just enjoyed a fab free pint - as a friend you can grab one too at selected pubs! https://t.co/irE4BNjRge via @punchpubs