No worlds left to conquer

This was originally going to be part of my Taste of Tradition post, but it developed a life of its own. Back in the early days of CAMRA, there were around a hundred independent breweries in the UK, plus perhaps thirty-five run by the Big Six. Between them they produced no more than a thousand brands of beer in total, and no more than four hundred in cask form. The launch of a new cask beer was unknown, and the withdrawal of brands was a regular event.

Compared with the current situation, when we have over a thousand breweries and ten thousand regularly-produced beer brands, this may on the face of it look like a very poor choice. However, in practice, choice is as much about availability and market concentration as the sheer number of products. It’s arguable that, for the customer, a market with 100 breweries and the Top 10 enjoying an 80% market share offers more meaningful choice than one with 1000 breweries, but the Top 10 enjoying a 95% market share.

The number of cask beers was such that you coulkd reasonably aim to tick them all off, as Frank Baillie, the author of the classic Beer Drinker’s Companion, claimed to have done. Contrary to popular myth, there was a great variety of different flavours and characters amongst the beers available, and there is some truth in the view that, over the years, some of the stronger and more distinctive tastes have been dumbed down. Seeking out different beers also involved a lot of exploration, as most were only available in their home territory, which often was very restricted. That, to my mind, only added to the interest. The multi-beer free house had scarcely begun to exist.

My legal drinking career didn’t start until 1977, a few years after CAMRA was formed but, armed with a student railcard, I managed to do a lot of beer and pub exploring in the late 70s. I managed to visit tied houses of the vast majority of the independent breweries that had survived into the CAMRA era, including long-gone rareties such as Burts, Eldridge Pope, Morrells, Border, Hull Brewery and Yates & Jackson, plus the “famous four” surviving home-brew pubs, all of which are fortunately still with us.

The only ones I missed of those still trading in 1977 tended to be fairly small and geographically remote from me. I think the list is confined to Belhaven, Paines of St Neots, Hoskins, Ridleys and Darleys. I never went in an Oldham Brewery pub until the day of the protest march over its closure in 1988. I’ve done both the Isle of Man ones, although none in the Channel Islands, which of course are not strictly speaking part of the UK.

Darleys is perhaps a particular regret, as the brewery did not close until 1986, although I did not live in the North between 1977 and late 1984. Their tied estate was also rather oddly distributed, with a concentraton of pubs in and arouhd Hull, and none in the centres of the major Yorkshire towns and cities. Had there been a Darleys pub in York I would certainly have ticked them off. The picture at the top is of Darley’s brewery gate in Thorne, Yorkshire, and below is a classic image of the brewery taken in 1975, from this website. That’s an interesting touchstone of people’s attitude to brewery heritage – some will say “Wow!” while others will say “Yawn!” Not entirely surprisingly, the pub on the corner – The North Eastern/Corner Pin – is now an ex-pub. 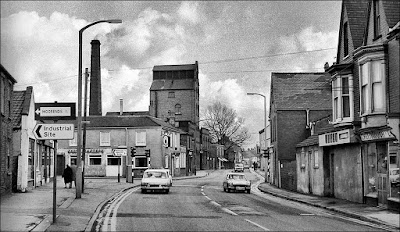 Clearly the rise of micro-breweries in the subsequent years has complete altered the situation, and “bagging them all” has long ceased to be a realistic aim. One of the criticisms levelled at beer tickers is that they never were going to get every single beer, as a train or bus spotter could potentially do, although, unless you are an obsessive completist, I don’t really see that as a problem with something that for many is an interesting hobby. It also should be remembered that established breweries never produced seasonal ales until after the Beer Orders – that was very much something that started in the 1990s.

While I don’t claim to be any kind of pub or beer ticker, I’ve certainly drunk in tied houses of all the remaining regional and family brewers, plus the “famous four” home-brew survivors. For someone who’s got into modern craft beer but wants to explore the traditional side a bit more, that would be an interesting and achievable exercise. Not too hard, but would involve a fair bit of travelling, as most of the smaller tied estates are very concentrated. Sadly, nowadays, you wouldn’t need to venture over the border into Scotland, and there are even Okells pubs on the mainland.

Then, if you wanted a bit more of a challenge, you could start ticking off all the pubs belonging to specific breweries. Given their small estates and concentration in and around the urban Black Country, Batham’s and Holden’s would be fairly easy to do, and then for a complete contrast you could move on to Donnington in the Cotswolds and Elgood’s in the Fens. “Curt Mattis does Donnington”¶ - now that would be worth reading!

The ultimate achievement for the tied house ticker must be to do Felinfoel. I don’t think any appear in the current Good Beer Guide. All are well off the beaten track in West Wales, plenty are a bit grotty and unappealing, and many only offer keg beers. But keg is cool now, right?