The apple of my eye?

In the late 1970s, CAMRA embraced campaigning for traditional cider, leading to the creation of a group called APPLE (Apple and Pear Produce Liaison Executive – yes, I know!). Cider is now a prominent feature at many CAMRA-run beer festivals, not least Stockport. CAMRA organises regular Cider Pub of the Year awards and even runs cider-only festivals. 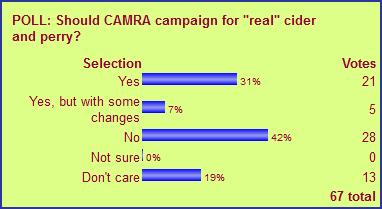 However, many members have never felt that it’s really a good fit, and it has re-emerged as an issue in CAMRA’s current revitalisation project. So i thought I would run a poll on whether CAMRA should campaign for “real” cider, with the results shown above. A clear division of opinion, although with the “anti” faction recording a narrow majority.

I know at times in the past when I’ve ventured on to the subject of cider, I’ve ended up having my head bitten off. But I can see both sides of this debate. On the pro side:

But, on the other hand: I’m agnostic on this. I enjoy the occasional drop of cider, and each year at Stockport Beer Festival I usually have one session on cider and perry. But I know the consumer read-across is limited and that, in the absence of a clear “real ale” type definition, APPLE have tied themselves up in knots in an attempt to define “real” cider. Many of them strongly objected to last year’s AGM decision to allow natural fruit flavourings, which are, of course, generally accepted in beer, if not universally liked.

So my vote was for “Yes, with changes” – specifically a more relaxed definition of “real cider” which also allows more bottled ciders to be brought within the fold. If it’s a pure juice, unpasteurised product, I really fail to see what the problem is. I don’t think CAMRA should totally cast cider adrift, but it needs to be recognised as a peripheral activity and not a core campaigning objective. Some people, of course, would make the argument that quality cider would be better served by having its own dedicated consumer campaign. 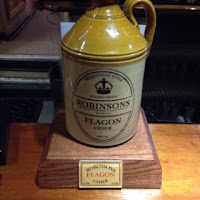 It’s also worth saying that, unlike real ale, “real cider” has never gained significant traction in the wider pub trade. Broadly speaking, because it’s too strong and too flat. Every new-build dining pub has real ale; none has real cider.

But, in recent years, there’s been a huge rise in distribution for “craft keg” cider from independent producers s outside the “big two” of Bulmers and C&C/Magners, such as Westons, Thatchers, Cornish Rattler and Aspall. Arguably there’s more craft keg cider around than beer. Even small local producers such as Robinson’s of Tenbury Wells (no relation to the Stockport brewer) are getting into the act with their Flagon Cider. Maybe that’s where the commercial future of high-quality independent cidermaking lies, not with still, murky bag-in-box stuff..