A crown of spoons 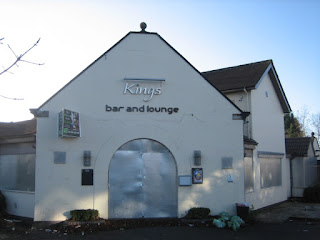 Interesting news that Wetherspoon’s have bought the former Kings “bar and lounge” in Poynton, Cheshire and are currently in the process of refurbishing it, with a view to opening on Tuesday 18 December. This was a former Greenalls pub called the Kingfisher, probably dating back to the 1960s, which went through a variety of “trendy bar” incarnations before finally closing last year. The photo, taken in January this year, shows it in “tinned up” state.

Poynton is a large and fairly prosperous commuter village that only has one other pub and one bar in the centre, so there is obvious potential for trade. However, as I have pointed out before, Wetherspoon’s business model is very much targeted on sites with a lot of pre-existing footfall, and they have tended to avoid locations such as this where a substantial proportion of customers would be expected to arrive by car.

However, they have shown signs of tentative expansion into more suburban locations, such as their acquisition last year of the Gateway in East Didsbury, so it will be interesting to see how this one goes. At the same time, Joseph Holt have just bought the monumental Fiveways at the southern end of Hazel Grove, a couple of miles up the road, from Spirit Group. This was also originally a Greenalls pub. Do I foresee a bit of rivalry between the two?