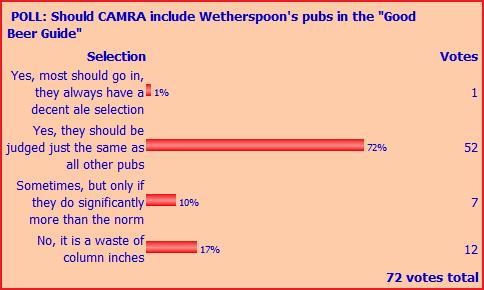 In the recent discussion about Good Beer Guide selections in Falmouth, the point came up as to whether there was any point in putting Wetherspoon’s pubs in the book, so I thought I would ask people the question. As can be seen from the poll on the right, the answer was a clear “Yes”, with 72% saying they should be treated just the same as any other pub.

However, personally I have to say I have some sympathy for the bottom two options, as Wetherspoon’s pubs are so homogenous in terms of menu, general ambiance and even the sort of beer range that is offered, that it’s a case of “seen one, seen them all”. This is not to say I wouldn’t use them, but I doubt that many people would go out of their way to visit one rather than another, as they might with an individually-run pub of character. And does the presence of a Spoons pub in the Guide indicate more the lack of local competition than the fact that it actually keeps its beer better than those that aren’t included?