A pub of two sides 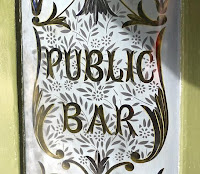 Martyn Cornell recently made an interesting post on his Zythophile blog entitled Shades, dives and other varieties of British bar about the way over the years different sections of pubs have been put to different uses and attracted different social groups. One significant change that has taken place during my drinking career is the large-scale elimination of the division between public and saloon or lounge bars. There was a time when many would sneer at “one-bar pubs” that had been “knocked through”, but now it is very much the rule rather than the exception.

Having said that, there are still a number of pubs around here that retain the division and where it continues to work pretty much as intended. The risk is, of course, if you remove the distinction the traditional vault customers end up colonising the lounge. Very often, nowadays, that distinction between types of customers exists between pubs, rather than within pubs.

Until the early 1970s, when it was abolished by the Heath government, there was official price control of public bar prices, which led to a price differential between bar and lounge sides, although I suspect that owed as much to custom and practice as to legislation *. In many pubs, this differential persisted for many years afterwards, although as far as I know it has entirely disappeared now. Having said that, in the comments to the post I linked to above, one person mentions it still applies in the Fox & Goose in Kingswinford near Dudley. Does anyone know of anywhere else? I would suggest other Banks’s pub in the West Midlands would be the most likely candidates. A little bit of investigation reveals that the Fox & Goose, like many other similar pubs, is now a Tesco Express.

Indeed, in my experience, the separation of public and lounge sides was probably strongest in the Midlands. In many of the characteristic inter-wars roadhouses and estate pubs, the prominent door in the centre would lead into the public bar, with a long bar counter facing you, and the lounge was accessed by a separate door at the side. In the 1980s, Banks’s built a number of new pubs in the Manchester area with entirely separate Midlands-style public bars that didn’t really suit the local trade, and which ended up being converted to one bar (and, in some cases like the Milestone in Burnage, demolished after a career of less than twenty years). This layout also applied on a smaller scale in the famous Ma Pardoe’s (Old Swan) home-brew pub in Netherton near Dudley.

On the other hand, many pubs in the North had a central bar and lobby with various rooms radiating off so, while one room had an obvious “vault” or “tap-room” character, it wasn’t as if there were two entirely separate zones. A common plan was to have a vault on one or other side of the central door, with a long bar counter, and other rooms accessed by going straight ahead and served by a hatch to one side of the bar. This can still be seen in the Plough in Gorton and also in the Waterloo in Stockport, although in the latter, strangely, the roles of the two areas have been reversed.

* I’m too young to remember this, but surely if public bar prices were controlled, but you could get out of the restriction by turning all your pub into a lounge bar, everyone would have been doing it, and it would have been a gaping hole in the legislation. Or was it that scrapping the restriction gave pub owners a new incentive to knock them through?