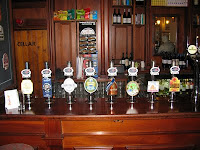 
Choice is often good, but quality is always good. I’d rather have two beers in top nick, that ten in so-so condition. Poor quality beer has always been cask beer’s Achilles Heel. Pubs really do have to ensure that they always serve beer well, particularly as they struggle to lure customers in. Failure to do so really is both inexcusable and suicidal these days.

I have to say that I encounter more pints than I should, even in Good Beer Guide listed pubs, that, while not returnable as such, are just a bit flat, tired and lacklustre. And, as I’ve said before, for many people the risk that one in five pints is going to be dull and flabby is one they don’t think is worth taking. So I thought I’d do a bit of maths on pub turnover.

According to the BBPA statistics, there are about 2 million bulk barrels of cask beer sold in the UK each year. Let us assume that there are 50,000 pubs, and 60% of them sell cask beer. It doesn’t matter if those figures are a bit out, as the general point remains the same. That makes 67 barrels per pub per year, 369 pints a week, or 53 pints a day. It’s generally reckoned that you’ll struggle to keep cask beer in good condition beyond three days, so even if you get your beer in 9-gallon firkins, that means you can only have two beers on before quality begins to suffer. Beer is available in 4½-gallon pins, but they’re far from usual. It’s also the case that pubs typically do half their weekly business on Friday and Saturday nights, leaving only 185 pints for the rest of the week, or 37 a day. So it’s hardly surprising you often get a tired pint early doors on Tuesday evening.

Simple observation suggests that the typical pub selling cask beer has more than two beers on, and in recent years the number has tended to increase even as overall volumes have fallen. Many ordinary pubs now have five, six or seven different beers. Obviously there are some pubs that do have the turnover to keep a lot more beers in good nick, but the law of averages means that others won’t even have the turnover for two. Keeping beers on well above three days must be extremely commonplace.

So perhaps there needs to be more emphasis on quality rather than quantity for its own sake, and the automatic praising of a pub for “putting on another handpump” should be replaced by positive references to pubs that limit themselves to one or two well-chosen beers.

Posted by Curmudgeon at 9:11 am