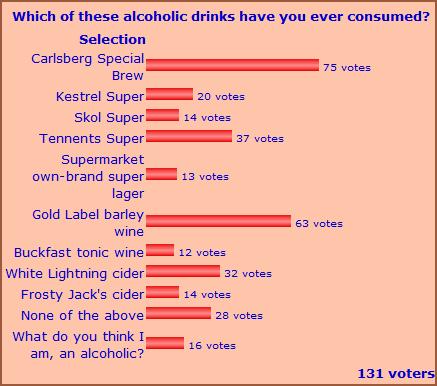 There were an impressive 131 responses to my survey on which high strength or “problem” drinks people had consumed, and some interesting results.

Carlsberg Special was, predictably, the winner, although with Gold Label a surprisingly strong second and Tennent’s Super third. Possibly many of the Gold Label responses came from memories of drinking it in nip bottles in pubs many years ago, when it was a stonking 10.5% ABV rather than the current watery 7.5%.

Buckfast Tonic Wine was last, although I don’t think it’s widely available outside Scotland. Just over a third had never tried any of them.

I suspect if the question had been “which have you drunk in the past year?” the positive numbers would have been far lower. However, it does show that “responsible drinkers” – which, of course, you all are – do at least occasionally toy with these products.

Maybe next I need to ask the same question about Old Tom, Duvel, Chimay and Hardcore IPA.