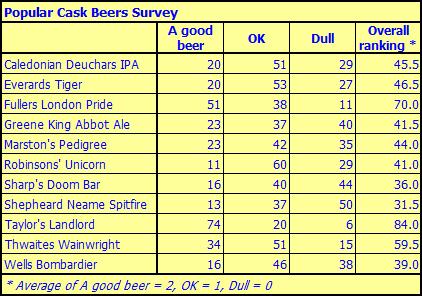 Following the, er, lively debate generated by my post about the exclusiveness of the “craft beer” movement, I set up a poll on people’s attitudes towards some of the most popular cask beers. I also included our local stalwart, Robinson’s Unicorn. The results are shown on the right.

Only three beers – Taylor’s Landlord, Fullers London Pride and (maybe surprisingly) Thwaites Wainwright got an overall positive score. All the rest got more votes for “dull” than “good”. Yet these are beers that are amongst the biggest-selling real ales in the country and also, in many cases, are top-selling premium bottled ales too.

It’s well-nigh unknown to see most of these promoted on beer blogs, or in the editorial of CAMRA publications. Is this not indicative of a growing divide between the views of the cognoscenti, and what the ordinary, but moderately discerning, punter, chooses to buy? By simply deciding to go for cask in the pub, or a PBA in Tesco, the customer is already making a statement that he wishes to distinguish himself from the herd drinking Carling or John Smith’s Extra Smooth.

And the PBA sector is not directly championed at all by CAMRA (except in the sense that most of the beers have cask equivalents) and also, except in its more esoteric manifestations, rarely features on beer blogs either. Yet this is one of the fastest-growing segments of the beer market. Where do customers get the information as to what to buy, and what to avoid? Certainly not from any self-declared beer enthusiasts. I’ve more than once heard PBAs referred to as “real ales”, which indicates there is a widespread perception that they are the take-home equivalent of cask beers in the pub.

There are also a growing number of successful cask micro-breweries that have achieved wide distribution without any significant championing from the enthusiast community, Otter being a good example. Good branding and sales practices must be important factors, but isn’t another brewing an accessible range of ales in the classic British tradition that are never going to steal the show, but equally reliably deliver what they promise?